Finland has risen to the pole position in European statistics measuring venture capital investments in startups relative to GDP. Already for several years, Finnish startups have been Europe’s most attractive investment targets for venture capitalists, as measured by a long-term average. In 2018, Finland ranked first also in the short-term. Last year, Finland improved its ranking also in the amount of private equity investments received by later stage growth companies.

In 2018, Finnish startups received a record-breaking € 479 million in investments of which venture capital investments accounted for € 203 million. VC investments accounted last year already 0.096% of Finland’s GDP, which is more than in any other European country and twice the European average. In 2017, the corresponding figures were 0.055% for Finland and 0.039% for Europe.

“The venture capital market in Finland has diversified in a short time, and there is plenty of funding available for companies ranging from early stage startups to ones already expanding their global presence. The average venture capital investment currently stands at EUR 745 000. The largest international financing rounds have already grown to over tens of millions of euros. In addition to funding, venture capitalists bring much-needed help in building networks, recruiting and implementing a growth strategy” says Pia Santavirta, Managing Director of FVCA.

In 2018, Denmark rose to the second place in VC investments relative to GDP, dropping Sweden to the fourth place. In addition to the Nordics, Ireland, Great Britain, Switzerland and France have fared well for many years. 2018 was also a record-breaking investment year for many other European countries, which is demonstrated by clearly surpassed long-term averages.

“We must take care of the positive development of the domestic VC markets and the ability to support even more Finnish startups. Finland needs to be the best place for companies to grow and globalize, so that we can fully exploit our abilities to create new innovations and solutions for the global markets” reminds Santavirta.

The record-breaking investment year of 2018 raised Finland to the top tier in Europe also in terms of buyout investments. Finland improved its ranking by ten positions and rose to the fourth place in Europe. Last year, buyout investments already accounted for 0.491% of Finland’s GDP, compared with 0.198% in 2017.

Last year was also a record year for many other countries, and long-term averages were surpassed. The European average rose to 0.345% last year from 0.311% in 2017. 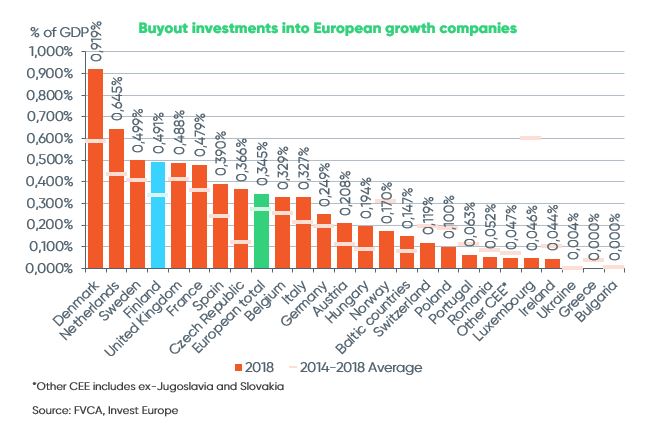 Although Finland has outpaced other Nordic countries, there is still much room for growth. The European average for growth investments stood at 0.070% of GDP. In terms of longer-term averages, Luxembourg, France and the United Kingdom are in the lead.

“There is clearly a growing demand for minority investments in the Finnish corporate sector. Especially in generational changes, the presence of a minority investor enables business continuity and brings new energy to drive growth. There would also be room for new private equity funds in the growth markets” comments Santavirta. 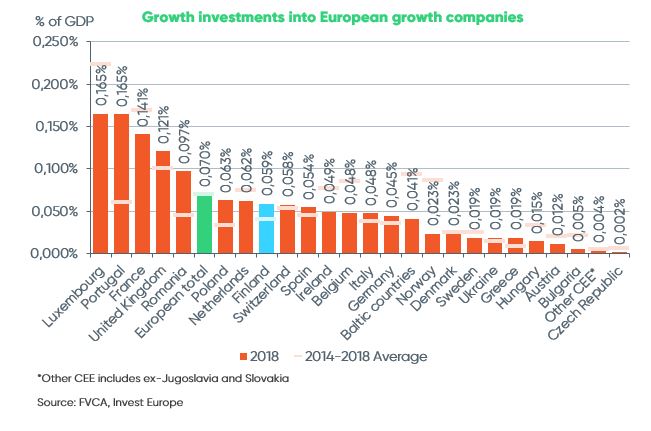 FVCA is the industry body and public policy advocate for the venture capital and private equity industry in Finland. As the voice of the Finnish VC and PE community and the entrepreneurs they fund, it is our role to demonstrate the positive impact of the industry on the Finnish economy. The majority of Finnish private equity firms are members of the association. www.paaomasijoittajat.fi @FVCAfi